From London with Love: An eyewitness account by Fahim Rana following his recent trip to Bangladesh

The following account has been written by Brother Fahim Rana, based in London, who visited Bangladesh to see the work of Muslim Charity between 8th and 11th December 2017:

I’ve just come back from a trip to Bangladesh with Muslim Charity and seen first-hand the challenges facing the charities that are operating in the area. I went not on behalf of any organisation but to personally experience the hardship being suffered by the Rohingya refugees and street children, and to see how the donations were being utilised by Muslim Charity.

I experienced not only the people crisis but also the logistical issues, negotiations and bureaucracy being faced by the charities and how extraordinarily well this is being managed by Muslim Charity.

We visited a child shelter in Dhaka which caters for children that have been abandoned, lost and exploited and I was astounded by how well managed the child shelter is and how organised Muslim Charity is. An example of this is the full documentation with records showing the how’s, what’s and when’s of each child in the shelter. This was not something I expected and was very pleased to see. 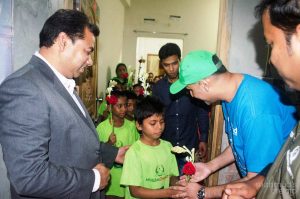 Fahim Rana meeting some of the children rescued from the streets in the transitional shelter in Dhaka, Bangladesh (8th December 2017).

The children all looked very happy and we heard from the children themselves the quite troublesome circumstances of how they ended up on the street and how the shelter is providing them with not only the basics like food and shelter, but also a caring and nurturing environment before they move on to the next stage of their lives. The next stage can be a referral to a more permanent home or re-integration back into their family. What is quite important is how Muslim Charity carry out their due diligence prior to referring or reintegrating the children to ensure they are not put at risk of further abuse.

We moved onto Cox’s Bazar and spent two days in the refugee camps with the Rohingya. We saw how the Medical Aid is delivered with trained personnel. We were given an overview of the water solution projects where the aim of each water solution is to deliver fresh water on a daily basis for up to 10,000 people for about a year and also saw the new shelters which were being built. The new shelters are being built with some street lighting run on solar energy to minimise the impact on the environment as well as reduce the possibility of fire hazards. There was also talk of planting trees to replace the trees that have been cut down to clear land for the refugees, so it was great to see a charity that also cares about the environment. We saw winter kits being distributed for the refugees and what I didn’t expect was winter kits specifically for people with disabilities. It is great to see how they are catering for people across the board. 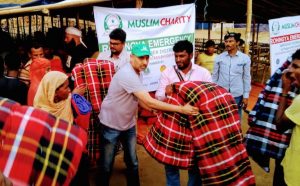 The Child Friendly Spaces (CFS) are another initiative being undertaken by MC and it was clear to see how the children enjoyed playing in these areas. It’s important to note there is not much for children to enjoy in the camps and the CFS was one of the few places where children can actually enjoy just being children. This was fully staffed and equipped with colouring books, toys and games for the children to enjoy.

Prior to my trip although I tried to take care in seeing how and where I gave any donations, but this trip has really opened my eyes into how the donations are being spent. Just about every charity has a website detailing where the money is being spent but in reality it is very hard to know how your money is being utilised. Myself and a number of other people on the trip gave Muslim Charity quite an interrogation on how they spend their money and it was refreshing to see they didn’t duck any questions and were transparent and accountable about their spending. What was apparent was that money is spent diligently and the spending is maximised. It’s easy to make a donation to a charity and then close your eyes thinking that it is now their job to ensure your money is being used efficiently. However, with Muslim Charity every penny counts and I have peace of mind that when I donate to MC the money is being fully utilised to its maximum potential. The ethics displayed by MC are commendable and is something that we can all learn from. 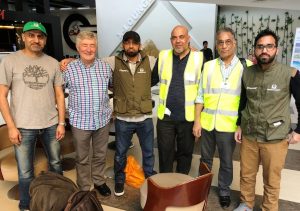 The staff of Muslim Charity were truly amazing and they made the experience so much more insightful than it could have been. They were on hand to answer any questions and were very patient with our requests and bent over backwards to accommodate all requests. A big thank you to Maroof Bbhai, Irfan Bhai and Fazlul Bhai and everyone else behind the scenes at Muslim Charity for a truly amazing experience.